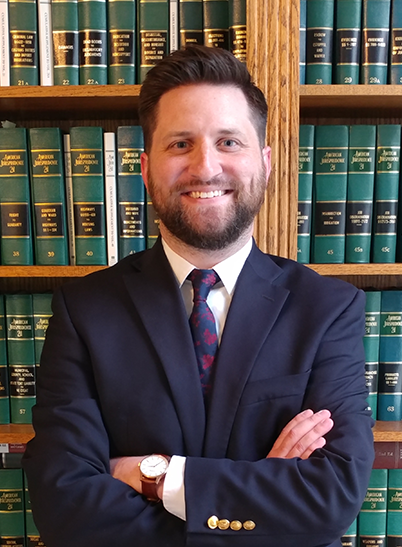 Corey Nichols joined Apollo Law in March 2021. He is a Frankfort native, and currently lives in town with his wife, Mary, and two children. He brings a robust Family Law practice to the firm, and represents clients in divorce and custody proceedings in Franklin and surrounding counties. He also represents clients charged with misdemeanor and felony offenses in both District and Circuit Court. Corey is a member of the Kentucky and Franklin County Bar Associations. He served as President of the Franklin County Bar in 2019.Corey received a Bachelor of Arts with a major in Education and a minor in English from the University of Charleston (WV) in 2008. He taught AP Literature at Cornerstone Christian Academy, and was a youth pastor at his church before going to law school. He received his Juris Doctor in 2014 from the University of Kentucky College of Law.During his time in law school, he clerked for multi-state firm Steptoe & Johnson in their litigation practice groups, and wrote daily posts for popular website Kentucky Sports Radio.After receiving his J.D., Corey served as a senior staff member on former Attorney General Jack Conway’s Campaign for Governor. He practiced law in Frankfort from 2016 to 2021 at Michael Hawkins & Associates.